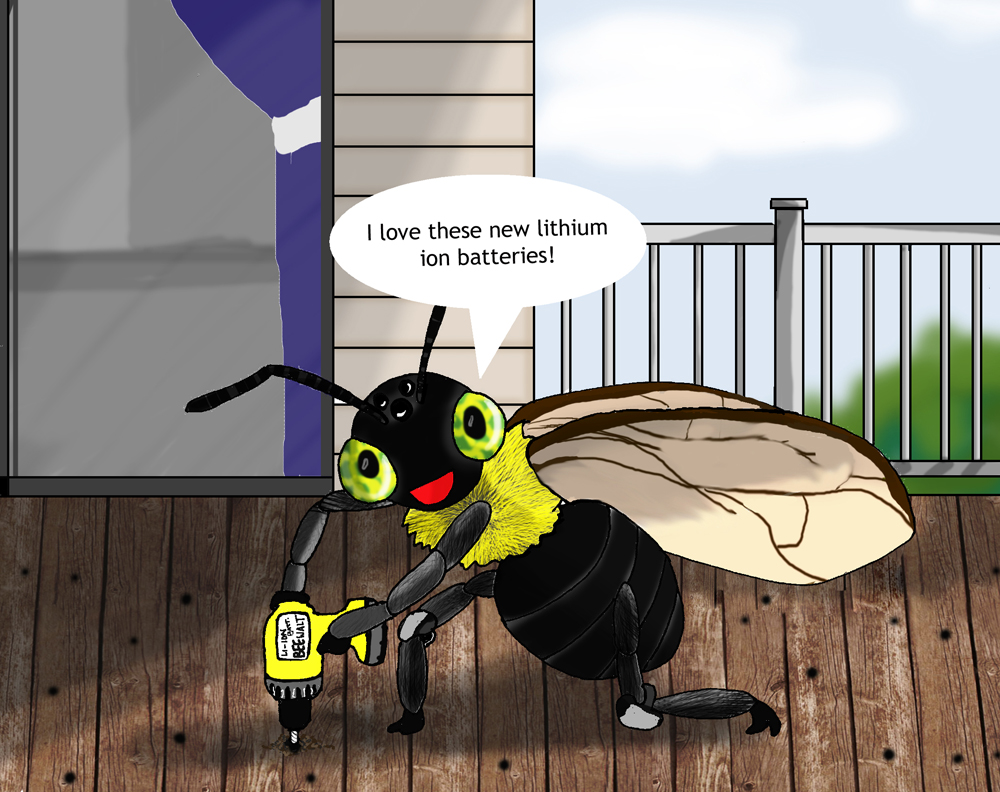 Have you ever been walking around on your deck and had a big, juicy bee swoop down at you like a B-52 Bomber? There’s a good chance you’re encountering a carpenter bee protecting its “nest,” which is really YOUR wood. No need to create a fuss yet though, male carpenter bees are unable to sting and are just trying to scare you off… and while females can sting, they rarely do. While very similar in size and appearance to bumblebees, they can be distinguished by their shiny black abdomens and lack of hair and are usually seen flying near eaves of homes or around decking in a fast jerking manner. Ultimately though, their dead give-away characteristic (and reason for their name) is the ½ inch perfectly round hole they “drill” into your wood, as well as the sawdust they leave behind!

If they rarely sting, then why should I even bother them? While it is true they usually only sting if extremely threatened, the real concern with carpenter bees is the susceptible structural integrity of your wood. After these bees carve their initial entry hole about 1 in. into your wood, they take a 90° turn and begin tunneling out wood to create individual chambers for their young. Every spring the new brood of carpenters emerges from the wood and each female begins to either create a whole new tunnel of their own or reuse old tunnels, going deeper into the wood each time! This loss of strength could cause serious concerns for wood supporting decks and patios. Over many years of activity, older houses in mountain environments have even been known to partially collapse due to the structural weakening caused by the tunnels! For Carpenter Bee damage….it’s what you don’t see that can hurt you!

Well, I don’t want that. Let’s get rid of them! That’s a great idea! Because no wood is safe from carpenter bees, contacting Budget Pest control Inc. for Carpenter Bee Service is a smart first step. Our fully trained, experienced technicians along with our state on the art trucks, equipment and materials will eradicate these flying drillmasters for good, allowing you and your home to get your life back to normal… bee free!

Contact Us Today to speak with one of our knowledgeable staff members about our Carpenter Bee Control and will discuss your particular infestation, go over Carpenter Bee Control options as well as provide you with a quote in a jiffy and offer speedy service to your property seven days a week! Give us a call…We are awesome!

Carpenter bees are large, rotund members of the bee family that very closely resemble bumblebees. They’re typically between .5 to 1 inch in length, with black and yellow body markings, and on rarer occasions they may even have a reddish tint to them. The main difference, which may be hard to notice, is that carpenter bees will have a smoother texture to their abdomen, whereas bumblebees have a very hairy texture to their abdomen.

MYTH: Any carpenter bee can and will sting you.
FACT: Only female carpenter bees can sting, and it is even rare that they will unless handled in an unnecessarily rough manner. Carpenter bees are very passive insects, by nature, and will only lash out if aggressively disturbed.

MYTH: Carpenter bees eat whatever wood they burrow into.
FACT: Carpenter bees, just like carpenter ants, will typically discard any wood they’ve burrowed through. On some occasions, they will use this wood to create small partitions in the nests they’ve made. 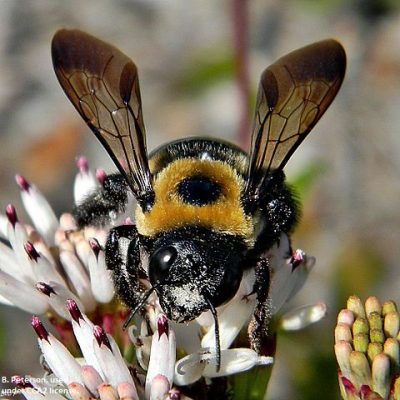 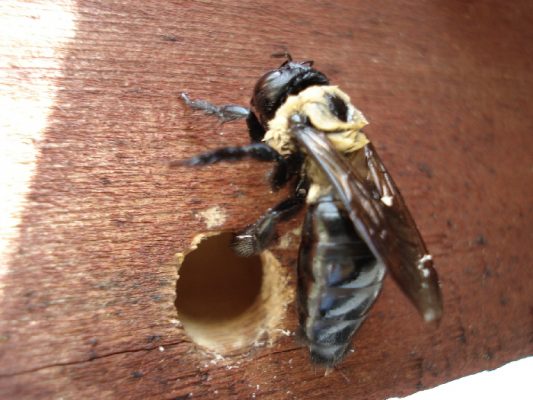 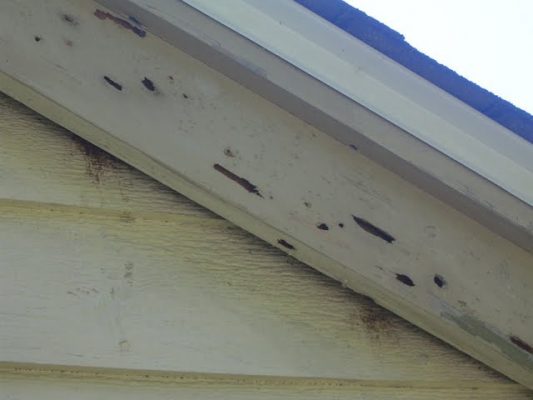 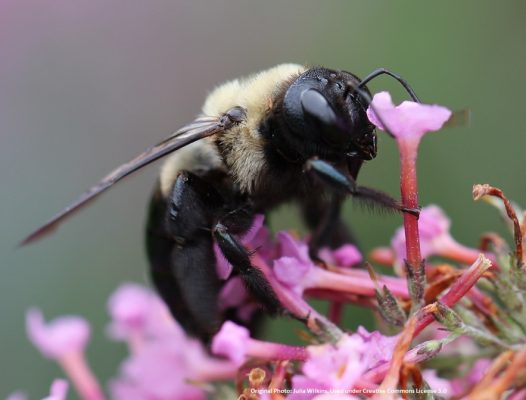 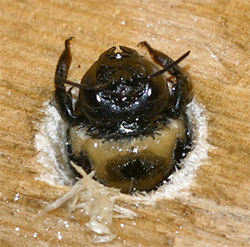 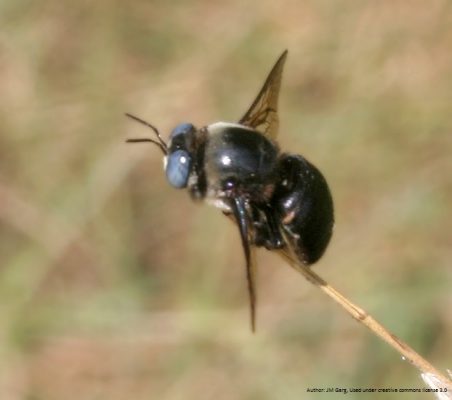 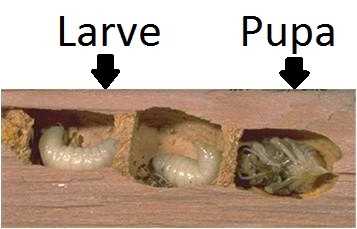 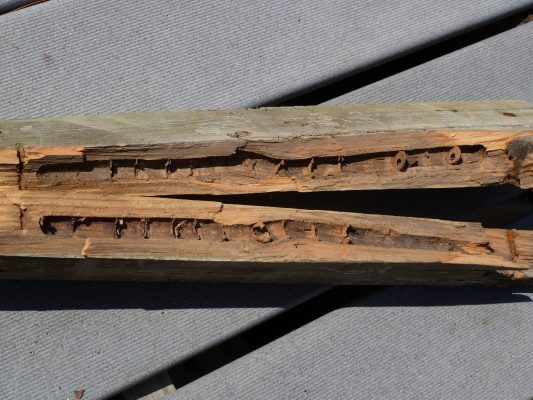 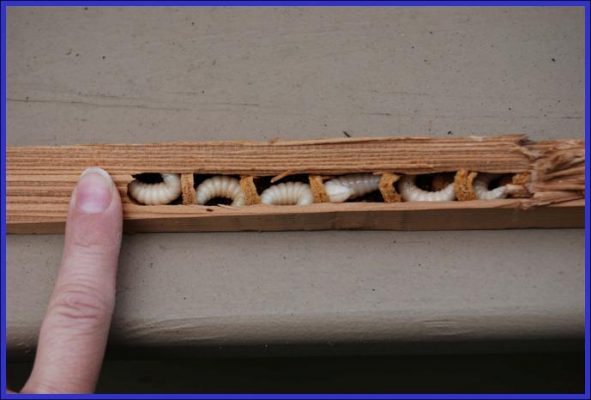 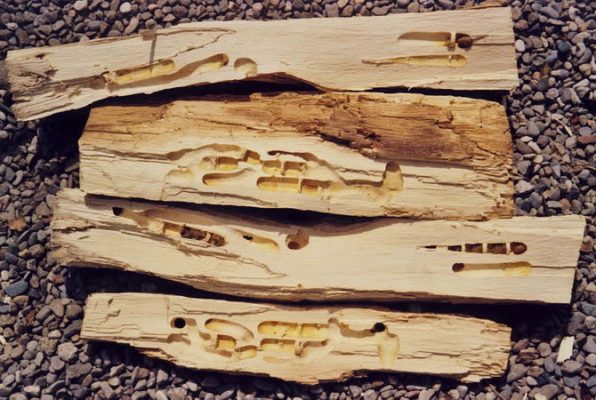