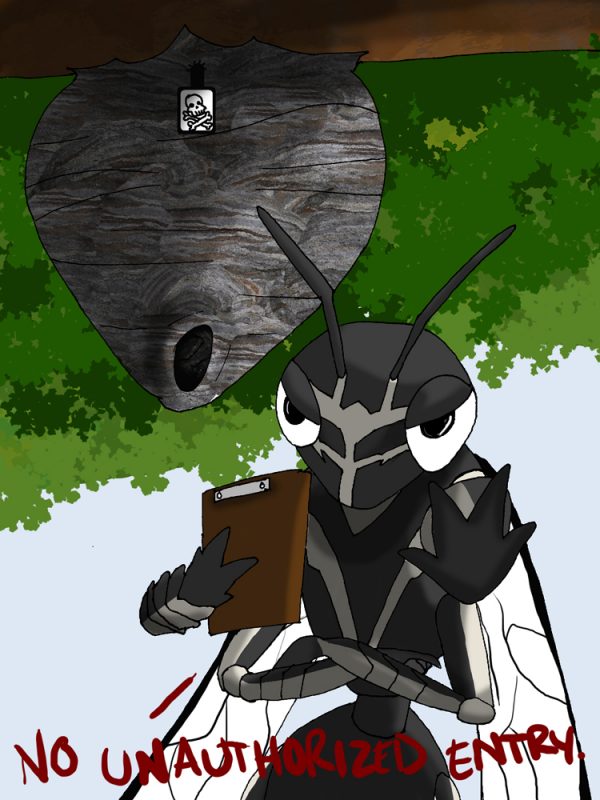 The big, mean bullies on your block with a definite need for Rogaine. They build nests on your home, the ends of branches or deep in bushes, so unless you’re paying very close attention in mid-summer, you’re probably going to get an unpleasant surprise while trimming those shrubs, bushes or trees.

Why do I have them? You’ve got premium real estate on your property in the form of a nice tall tree, lush shrubs or hearty bushes. These insects (just like their stinging kin) build their nests annually which can allow their queen a fighting chance to make it thru the winter. Baldfaced hornets are widely considered to be somewhat beneficial for two reasons; the first being that they kill other insects (yellow jackets, ants, etc.) and eat them to sustain the colony, and the second being that they pollinate flowers when in search of nectar, which is also another food source of theirs.

What can I do to help the situation? Keeping a vigilant eye on any of your trees and bushes for any regular activity will be of great assistance, but in this case, your best option will be just to stay away. Bald-faced hornet nests can be difficult to spot, so if you think you may have a problem…CALL THE PROFESSIONALS!

Is the treatment safe? The treatment is safe for humans and pets, although with any stinging insect treatment, we recommend evacuation of the immediate area until activity subsides to avoid any possible contact with these insects.

That’s nice and all, but I don’t want them. How do I get rid of them? Because of the danger in disturbing a nest, Professional help is always the best route, so call Budget Pest Control Inc to discuss our Bald Faced Hornet Control. Our fully trained certified technicians are equipped with the latest equipment, bee suits and treatment materials needed to defuse these ticking time bombs. While some people have the misguided nerve to try to take care of these nests on their own, bald faced hornets are very difficult and extremely dangerous to eradicate without proper equipment, protection and a solid game plan.

Call Budget Pest Control 24/7 After a chat with one of our friendly, informative office personnel, you will have an estimate for Bald Faced Hornet Control and, if you wish, one of our field technicians sent out in a jiffy…seven days a week!

Bald-faced hornets are usually anywhere from ½ to ¾ of an inch in size. They have a very distinct aesthetic design, sporting what looks similar to a skull-like pattern to their faces. Their bodies are very similar to yellowjackets (because, scientifically, they are yellowjackets), but with an ivory and black pattern rather than yellow and black.

MYTH: It is easy to destroy a bald-faced hornet nest from distance by using a pressure washer or hose to blast through the walls.
FACT: It is highly suggested that you not disturb a bald-faced hornet nest. Due to its design and the aggressive nature of the hornets, any sort of disturbance will aggravate them to the point of attacking the nearest perceived threat. 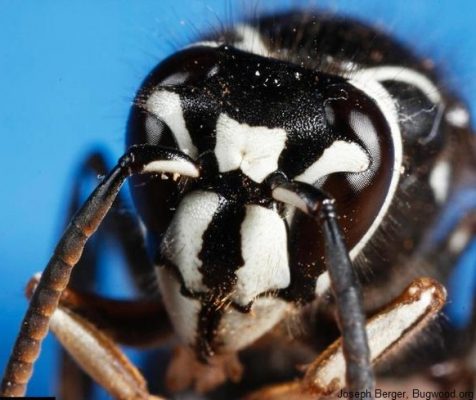 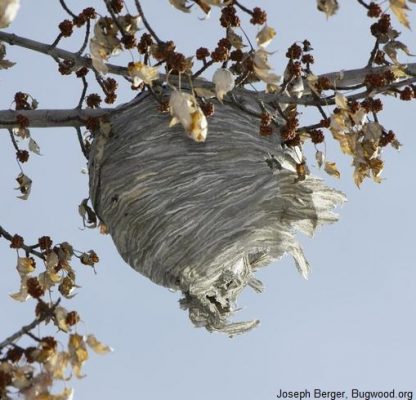 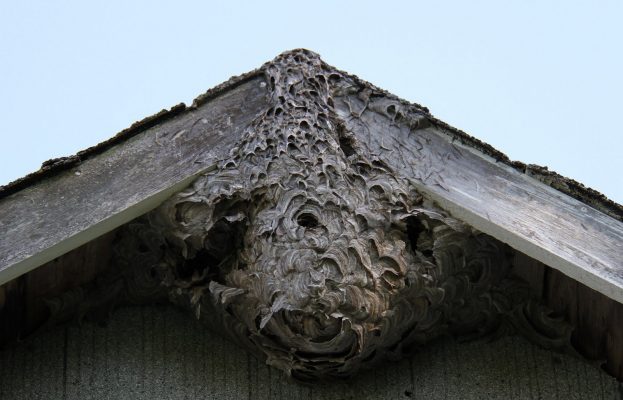 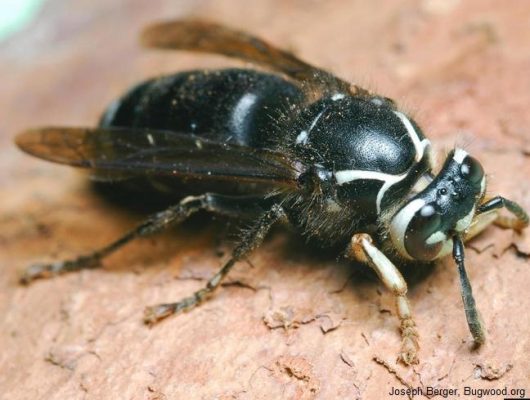 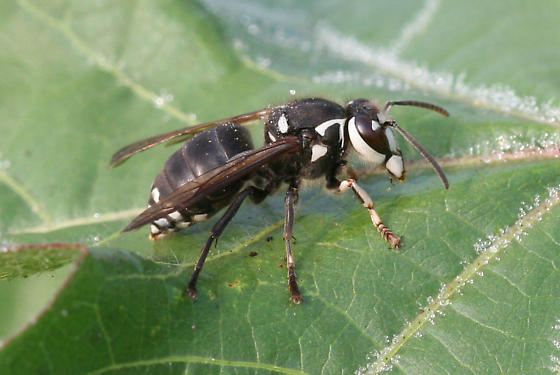 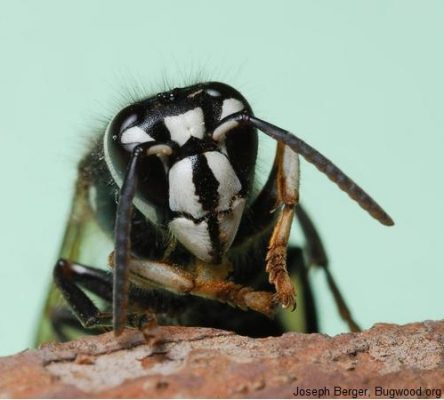 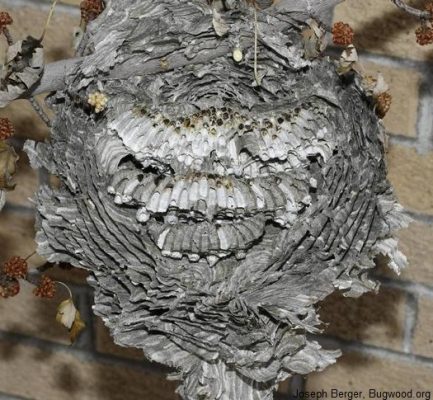 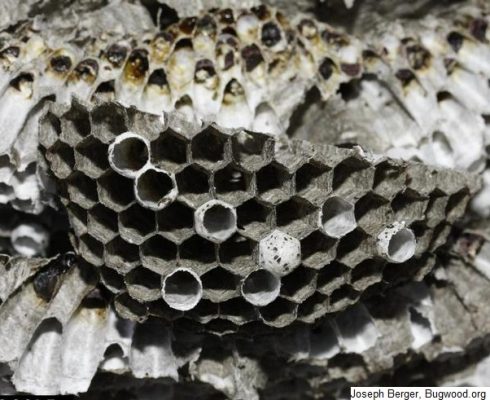 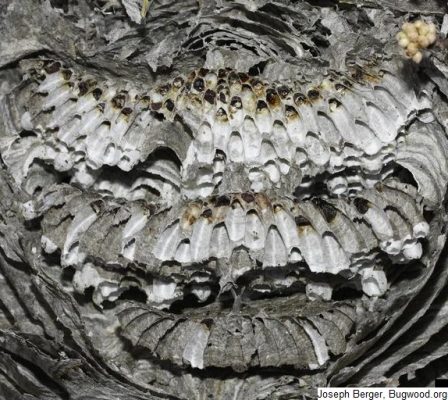 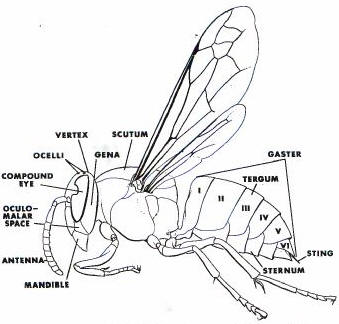